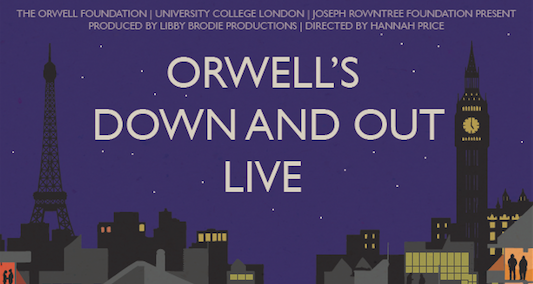 DOWN AND OUT LIVE to run in Paris

In the second installment of our Down and Out: Live project, we are bringing George Orwell’s classic book to Paris after it’s sell-out performance in London in June (which you can watch here).

The immersive performance, which asks searching questions about homelessness today, will take place at La Générale in Paris on 28th September, 2018. The performance will be in both French and English.

Orwell wrote Down and Out in Paris and London as a result of his own experiences sleeping rough and working on what would now be called zero-hours contracts in hotel kitchens. The dramatised reading draws on other pieces of writing by Orwell, including his diaries, The Spike and A Clergyman’s Daughter. Modern stories from the streets will be woven into the original text, alongside poems specially commissioned from three contemporary poets. Readers will include writers, activists, politicians, and people who have been homeless.

The original performance took place in London on 6th June as part of UCL’s Festival of Culture, and will be repeated at La Générale in Paris on 28th September from 2pm until 6pm.

The event is the result of a collaboration between Libby Brodie Productions, The Orwell Foundation, The Joseph Rowntree Foundation and UCL. It is supported using public funding by Arts Council England.

The performance will be live streamed and viewing events will be arranged in libraries and community hubs across the UK, with both the London and Paris performances being recorded in full and being made publicly available.

Get involved in Down and Out: LIVE

Libraries, bookshops, and community hubs can organise screenings. The performance will be live-streamed online. So, with the help of a computer, internet connection, and a screen or projector, members of the public can get involved in this nationwide event. On the day, it’s as easy as setting up a computer, a projector and some speakers, and clicking the link to get the live-stream started. Ask your local library whether they are hosting a viewing! We have also prepared a suggested reading list on Orwell and Homelessness. There’s fiction, non-fiction, and books for Young Adults, from classics to contemporary works.